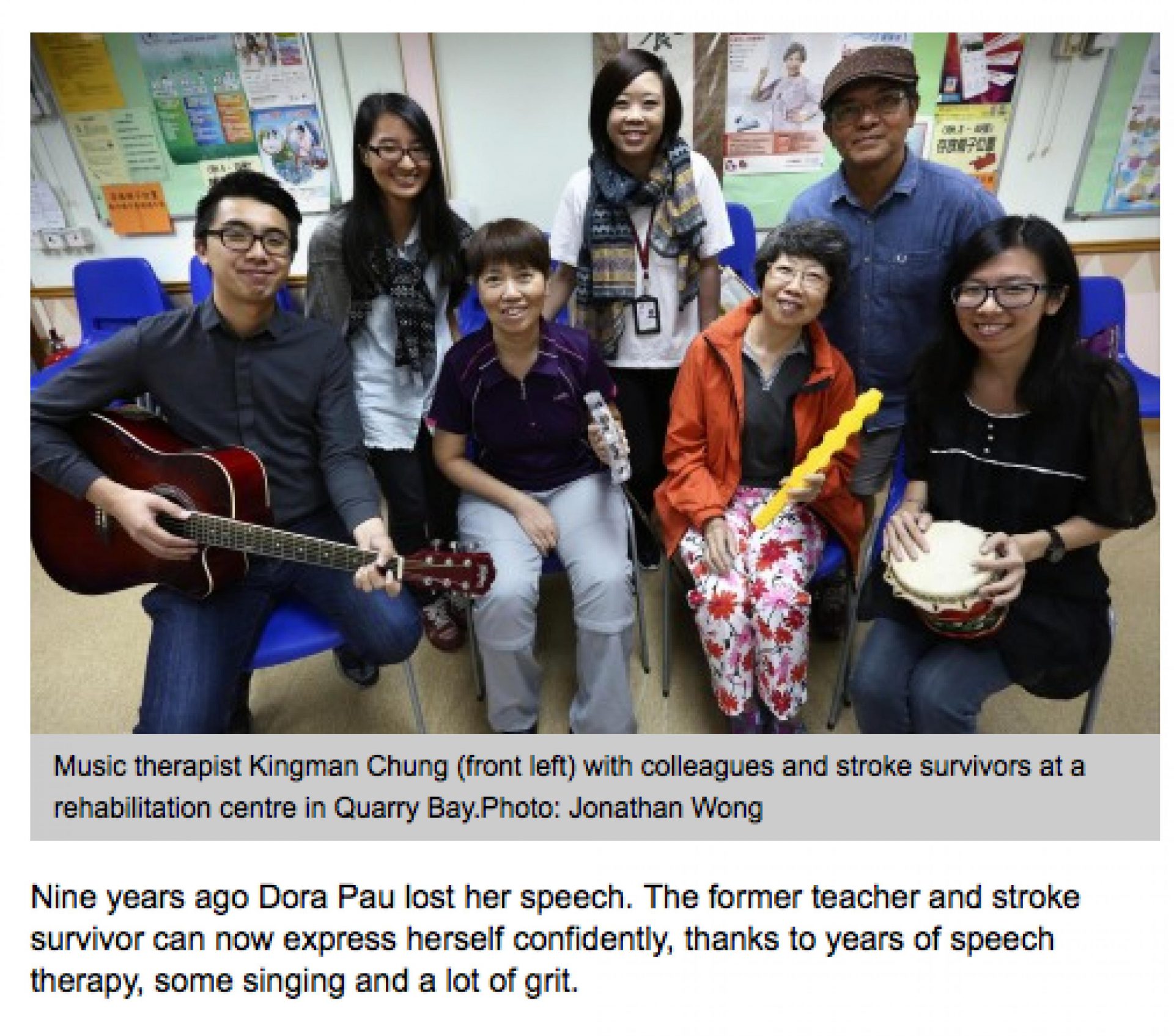 Nine years ago Dora Pau lost her speech. The former teacher and stroke survivor can now express herself confidently, thanks to years of speech therapy, some singing and a lot of grit.

“When I first realised I couldn’t speak any more I felt hopeless, frustrated and very sad,” recalled Pau. “But I couldn’t even say that I was sad,” she said.

Pau, in her 50s, was sitting among musical instruments in a rehabilitation centre, where she and other members of the city’s only stroke survivor choir meet for two hours every week.

The Centre for Community Cultural Development, the project partner of the Hong Kong Society for Rehabilitation, was a recipient of last year’s Operation Santa Claus charity drive. The cash raised by the joint initiative between the Post and RTHK funded the choir, led by music therapists, for the next three years.

Although the choir started just four months ago, its two music therapists, Kingman Chung and Gloria Leung, said that its members had made marked improvement in their pronunciation of words and confidence.

“Singing is relaxing,” said Pau. “When I talk, I need to think a lot about the words I’m saying. But I don’t have to do that when I’m singing.”

Helping stroke survivors regain their speech through music therapy has become increasingly popular around the world. In Hong Kong, however, the field remains in its infancy despite its numerous benefits.

Long-term services for stroke survivors are nonexistent locally, said social worker Zita Man, especially for helping those under the age of 60, like Pau.

When discharged from hospital, survivors are admitted to a rehab centre with a fixed period for recovery that can be unrealistic. Regaining speech could take years, and therapy is costly.

Stroke survivors found singing easier than speaking, said Chung, the choir’s director. This is because singing involved more areas of the brain that survivors might still be able to access. Emotions that survivors struggle to communicate could be released through melodies, he added.

“Music therapy has given her so much confidence,” said a man who identified himself only as Mr Leung. He took up the role of caregiver for his sister Anissa, 62, who had a stroke last year.

“At first she wouldn’t talk at all, she was totally unresponsive, but I knew she had a lot of emotions inside her,” said Leung, as his sister, sitting next to him, nodded her head. She was still not fully comfortable using full sentences, and easily felt overwhelmed and frustrated over the time it took her to form words.

But following song lyrics in tuneful melodies was both easy and enjoyable, helping reconnect pathways in her brain that had been damaged. Leung said singing gave his sister hope, to which she added: “I feel happy when I sing.”

The last comment and 7 other comment(s) need to be approved.
0 replies