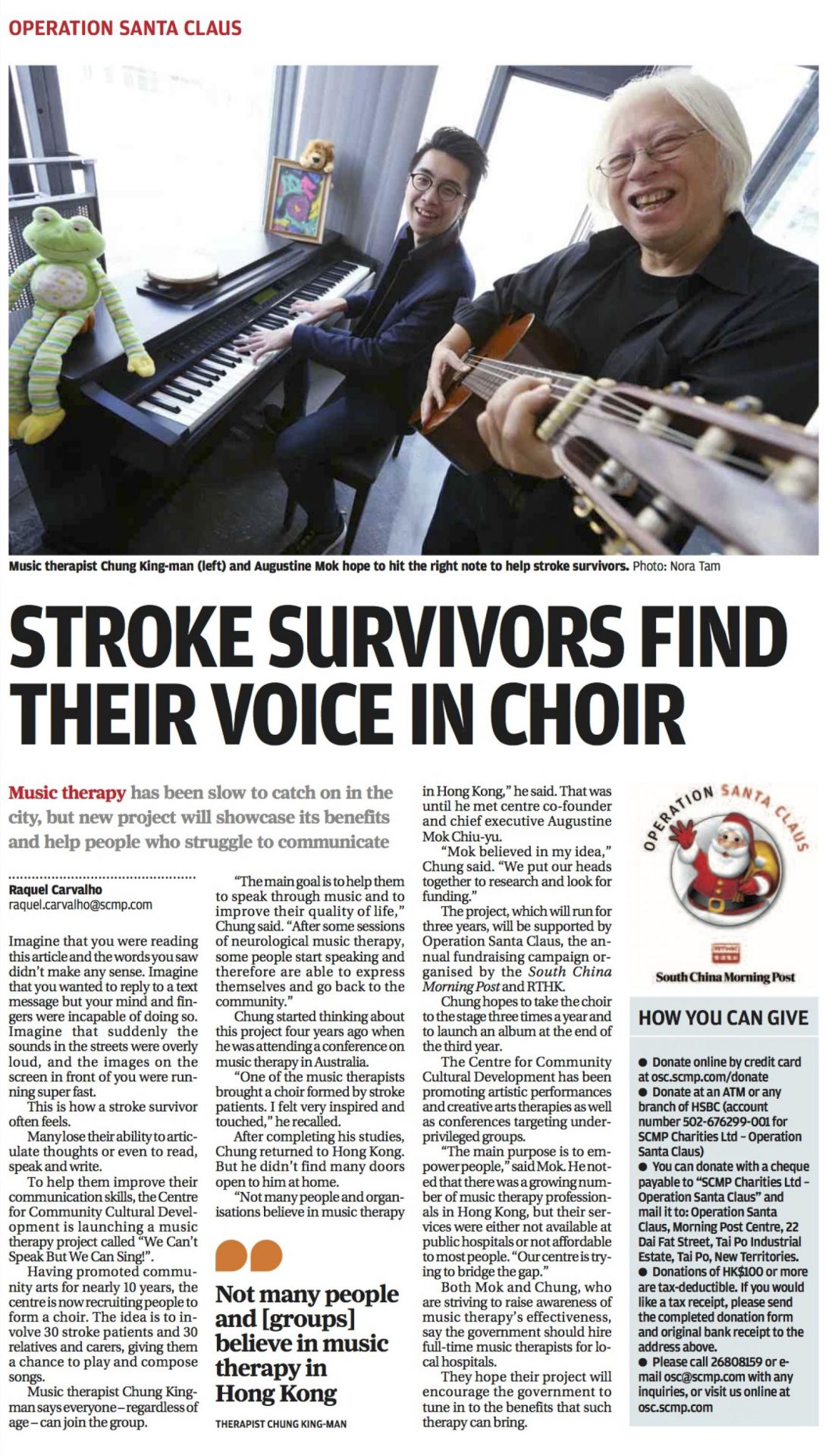 Music Therapy has been slow to catch on in the city, but new project will showcase its benefits and help people who struggle to communicate.

Imagine that you were reading this article and the words you saw didn’t make any sense. Imagine that you wanted to reply to a text message but your mind and finders were incapable of doing so. Imagine that suddenly the sounds in the streets were overly loud, and the images on the screen in front of you were running super fast.

This is how a stroke survivor often feels.

Many lose their ability to articulate thoughts or even to read, speak and write.

To help them improve their communication skills, the Centre for Community Cultural Development is launching a music therapy project called “We Can’t Speak But We Can Sing”.

Having promoted community arts for nearly 10 years, the centre is now recruiting people to form a choir. The idea is to involve 30 stroke patients and 30 relatives and carers, giving them a chance to play and compost songs.

Music Therapist Chung King-man says everyone – regardless of age – can join the group.

“The main goal is to help them to speak through music and to improve their quality of life,” Chung said. “After some sessions of neurological music therapy, some people start speaking and therefore are able to express themselves and go back to the community.”

Chung started thinking about this project four years ago when he was attending a conference on music therapy in Australia.

“One of the music therapists brought a choir formed by stroke patients. I felt very inspired and touched,” he recalled.

After completing his studies, Chung returned to Hong Kong. But he didn’t find many doors open to him at home.

“Not many people and organisation believe in music therapy in Hong Kong,” he said. That was until he met centre co-founder and chief executive Augustine Mok Chiu-yu.

“Mok believed in my ideas,” Chung said. “We put our heads together to research and look for funding.”

The project, which will run for three years, will be supported by Operation Santa Claus, the annual fundraising campaign organised by the South China Morning Post and RTHK.

Chung hopes to take the choir to the stage three times a year and to launch an album at the end of the third year.

The Centre for Community Cultural Development has been promoting artistic performances and creative arts therapies as well as conferences targeting under privileged groups.

“The main purpose is to empower people,” said Mok. He noted that there was a growing number of music therapy professionals in Hong Kong, but their services were either not available at public hospitals or not affordable to most people. “Our centre is trying to bridge the gap.”

Both Mok and Chung, who are striving to raise awareness of music therapy’s effectiveness say the government should hire full-time music therapists for local hospitals.

They hope their project will encourage the government to tune in to the benefits that such therapy can bring.

The last comment and 8 other comment(s) need to be approved.
0 replies